Europe got to the point when the state of exception might become the rule. If this happens, a social/political/legal response will be necessary. In my opinion, we are not intellectually prepared to give such a response. And I believe it is high time we get started. In this brief post, I sketch my idea of how this could look like.

This is an atypical post here, I treat it as a suggestion-giver to a possible EUI-wide initiative, which would connect scholars with a diverse substantial and methodological expertise/interest. However, I would obviously welcome any external cooperation, should this thing take off.

In short: in the aftermath the horrible events in Paris, France has extended the state of emergency for 3 months (90 sec explanation of what this means). We don’t know how the situation in Brussels will develop. God forbid, but it might be that as a result of another attack, or as a means of preventing it, others will follow.

No one questions the fact that we need security, that the criminals must be caught and next attacks must be stopped. However, the process might be longer and more difficult than it seems now. Next measures, based on real or just-strategic secret service reports, might add-up over the course of next months or years. I do not mean militarisation of the streets or curfew, I mean more subtle and ‘less visible’ changes: mass surveillance, arrests without warrants; something that we already witnessed in US after the Patriot Act, to name just CIA secret prisons or the NSA scandal.

If this happens, our notions of Democracy, Freedom, Human Rights or the Rule of Law will be challenged by the new factual (social and political) situation.

I think we can all well argue why this is undesirable. There might little place for argument, though.
What I think we are unprepared for is to argue: how, in this new situation, to best preserve them.
The trade-off between liberty and security is not a simple one, it is not even the correct one. What matters is not only what is done, but how it is done. 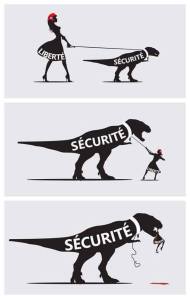 My idea, for a possible response at the EUI, would stand on two pillars: theory and facts-collection.

THEORY 1
What needs to be theorised first is the state of exception, which remains in the dialectical relationship with the ‘standard/desirable/everyday state’.
On the previous, I would go for reading:

OBSERVATORY
Another task would be data collection on what is actually going on and what media report, both on the level of ‘announced threats’ and the responses including explicit or implicit announcement of the state of exception, limiting the liberties, counter-actions etc. That would obviously lead to the enrichment of the concept.

With these two in mind, THEORY 2
Knowing what exactly is being compromised, and how to theorise it, it would be possible to reconstruct which parts of our ‘traditional’ understanding of Democracy, Human Rights, Freedom and the Rule of Law are being challenged, and prepare the path for the creative work.

Obviously, this will be much more complicated, and the scheme above might be challenged in any way, but I just wanted to show what I have in mind. And ask if anyone would be interested in doing sth like this.

I know we are all super busy, and it’s not that I have that much spare time, but I somehow have the feeling that we owe people something like this. And the more people would join, the better (and faster) this could be done. I might be wrong,

but if you’re interested, drop me an email (Przemyslaw Palka).

View all posts by przemek palka

2 thoughts on “When the state of exception becomes the rule”