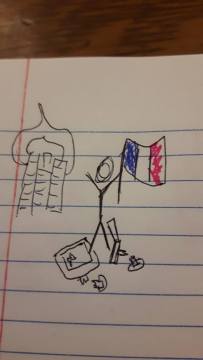 The text below has been found written on a toilet cabin door somewhere around the HLS campus. I was shown a photo of it, and sent a transcript. It’s a piece of fiction, and I don’t know what was the author’s intention. I don’t know who the author is either. I totally disagree with the ideas presented there. Read it critically, and try coming up with better and acceptable ways of dealing with the problems it identifies:

“In the end, it was quite simple. In the end, the history had the answers. And now everything is better.

There used to be two big internet companies, providing services to more than a billion people. These services became essential to the societies’ functioning. Yet, these companies were not really respecting the rights of the people. Privacy was inexistent, freedom of speech and assembly often violated, right to digital property not respected at all. Many wise women and men spent thousands of hours thinking about how to make these companies respect human rights of their users. Regulation? No one wanted to regulate. Competition? There was no competition. Petition? They didn’t listen.

Then, somebody remembered how the constitutionalism was born. When the states, not multibillion transnational firms, were major sources of human rights violation. Sure, there were philosophers, cool ideas, public discontent… But in the end, a lot of French people got mad, rallied together, demolished a few buildings, killed a few people, and said: look, here is a list of principles that one needs to follow while governing the state, otherwise we do it again.

And so, a few thousand people gathered in one valley, stormed the HQ of the two companies, demolished this and that, pondered beheading some people, handed over a list  of principles to some of these people and placed some new people on some positions. And said: govern your platforms based in these principles, or else.

Revolution. It worked once, why wouldn’t it work again?

It’s much better now. Is it perfect? No. Was it ideal way to do it? No. Is it better than it was? Waay better.

The notions of public and private actors are contingent and fluid. The notion of the power public in nature is fixed. And the nature of the social universe is such that when such a power is not tamed, it gets tamed.

In the end, it was quite simple.”

As I wrote above, terrifying story. So I repost it here, for us to be able to think of better ways of dealing with the problem of uncontrolled power that might one day emerge with some internet companies.

View all posts by przemek palka